The economy is strong, but the gap between those prospering and those struggling continues to widen. Cash-strapped Americans are failing to save money, struggle with student loan debt and face decreasing financial literacy, despite economic growth and declining unemployment over the past 10 years, according to new research from the FINRA Investor Education Foundation (FINRA Foundation). The study, "The State of U.S. Financial Capability," finds that key indicators of financial capability are no longer improving in step with the economy.

"This year marks a decade since one of the most significant financial downturns brought financial crisis and loss to millions of Americans," said Gerri Walsh, President of the FINRA Foundation. "While we've seen improvements in key measures of financial capability over the years, the 2018 findings suggest we have hit a plateau — and that not all Americans have recovered at the same rate."

The nationwide survey of more than 27,000 respondents is conducted every three years and is one of the largest and most comprehensive financial capability studies in the U.S. Originally developed in 2009, it measures key indicators of financial capability and evaluates how these indicators vary with underlying demographic, behavioral, attitudinal and financial literacy characteristics—both nationwide and state-by-state. 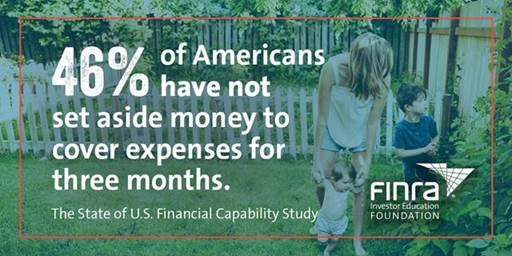 The FINRA Foundation is collaborating with USA Today to publish its research through a series of articles highlighting the financial struggles many Americans face. The report's findings show: 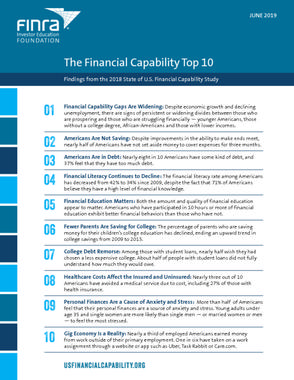 The divides between those prospering and those struggling are persisting or widening. Trends from the past four waves of the financial capability study show signs of widening or persistent gaps among certain groups on key measures of financial capability. While Americans, as a whole, have seen their ability to cover monthly expenses and bills improve since 2009, the 2018 data show that younger Americans, those without a college degree, African-Americans and those with lower incomes are struggling financially, calling into question the improved economy's ability to work as needed for all.

Americans are not saving. Despite improvements in the ability to make ends meet, there has not been an increase in the number of Americans' saving. Nearly half of Americans have not set aside money to cover expenses for three months. Moreover, Americans are stressed about money. More than half (53 percent) of those surveyed reported that just thinking about their finances makes them feel anxious. These tips can help you boost your savings.

High education costs are causing buyer's remorse for many. Among Americans with student loans, nearly half (47 percent) wish they had chosen a less expensive college. Among those with student debt, a similar percentage (48 percent) is concerned they will not be able to pay off their loans, and many did not fully understand what they were getting into when they got their loans, the survey shows. Meanwhile, late loan payments are rising.

Financial literacy has declined. Only 34 percent of respondents could answer at least four of five basic financial literacy questions on topics such as mortgages, interest rates, inflation and risk — compared to 42 percent in 2009. This drop in scores appeared most pronounced among younger Americans ages 18 – 34, who have had little exposure to high interest rates or inflation as adults. Test how you fare on the Financial Literacy Quiz.

"The financial capability survey is an invaluable tool for researchers, policymakers and advocates to deepen our understanding of financial capability on both national and state levels," said Walsh. "The 2018 survey's insights underscore that a growing economy is not sufficient to improve people's financial lives, leading us to further explore how fintech innovations, quality financial education offerings and the rise of the gig economy may impact the financial decisions and behaviors of millions of Americans."