Spread the Word: What You Need to Know About Bond Spreads

When investors agree to take on more risk, they generally demand a bigger reward. In the world of bonds, analyzing the size of that reward — typically in the form of higher interest payments — can give investors clues about both the risk of a particular issuance and overall market sentiment.

No bond exists in a vacuum, so one common way for investors to judge how much of a premium they’ll be collecting for taking on more risk is to look at a bond’s yield in comparison to that of a relatively risk-free U.S. Treasury bond of the same maturity. The difference between the yields of two different bonds is referred to as the “spread.”

The Treasuries market is one of the biggest and most active in the world, and the bonds are viewed as some of the lowest risk investments around since they are backed by the full faith and credit of the U.S. government. It is because of these characteristics that spreads for other bonds are most commonly calculated based on a comparison against treasuries.

What makes spreads widen and tighten?

>Bond yields — the returns investors receive on bonds — are moving targets. They go up when bond prices go down, and vice versa.

Likewise, yield spreads get wider or tighter depending on a number of factors, including supply and demand, credit risk and the overall state of the economy. Because spreads represent the relationship between a bond and a comparable treasury bond, spreads may change because of factors affecting the bond itself, the treasury bonds against which it is measured, or both. 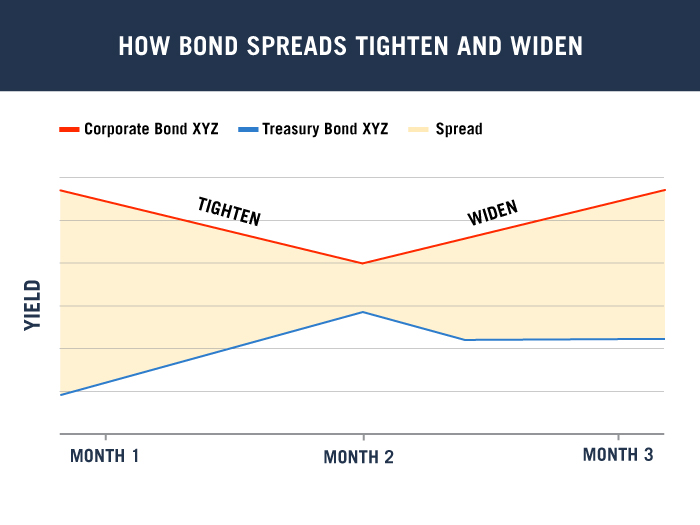 An individual corporate bond’s spread might get smaller as its credit profile improves, making it more likely that the company would meet its debt payments on time and in full. On the other hand, if something happened that called the company’s ability to pay into question — a massive drop in sales, for example — the spread would likely widen.

When investors pull money out of bond funds, which can happen for any number of reasons, the reduced demand for the bonds included in a fund’s portfolio can send the prices of those bonds lower. As a result, yields would rise, and oftentimes, so would the spreads for those bonds. Conversely, strong demand for bond funds could lead to tighter spreads.

Tough economic times also tend to send corporate bond spreads higher. When the economy gets rocky, investors seek safe havens such as U.S. Treasury bonds, which sends their yields lower. Thus, investors who watch bond spreads can get a pretty good idea of overall risk sentiment in the financial markets.

Just how big can spreads get during dark times? Consider what happened during the Great Recession seven years ago.

Spreads on high-yield bonds, which have lower credit ratings (and therefore higher risk) than investment-grade bonds — got as wide as 22 percentage points in December 2008, according to the Bank of America Merrill Lynch High-Yield Index. That’s nearly four times as high as the index’ 5.79 percentage point average spread from 1997 to today.

Since then, spreads on high-yield bonds have tightened, reaching a recent low of 3.35 percentage points in June 2014, according to the Bank of America Merrill Lynch High-Yield Index. The decline owes something to the economic recovery in recent years, as well as to low interest rates, which have sent investors in search of higher-yielding assets, upping demand for high-yield debt.

But in recent months, market events rattled the corporate bond market once again. Starting this past June, spreads for both high-yield and investment-grade bonds began to widen as prices of commodities such as oil and industrial metals plunged.

The average spread of the Morningstar Corporate Bond Index, which tracks investment grade bonds, increased about 25 percent since the beginning of the year, to 1.76 percentage points in mid-October.

The high-yield market saw a similar increase, with the spread on the Bank of America Merrill Lynch High Yield Index also widening nearly 25 percent since the beginning of the year to 6.26 percentage points in mid-October. The trend started in the energy, and metals and mining sectors, but has more recently spread beyond those sectors.

But beyond those wide benchmarks, the spread between a corporate bond’s yield and that of the comparable duration Treasury bond can vary greatly between bonds of different credit ratings and bonds of different sectors within the same ratings group.

So while keeping tabs on the credit ratings issued by agencies such as Moody’s and Standard and Poor’s is a good idea, it can also be helpful to keep an eye on spreads to help take your analysis of the risks and rewards of buying any specific bond a step further. (Read more about how to get to know your corporate bonds here.)

And widening spreads can also indicate that the economy is weakening or that risks are building in financial markets. That’s something any investor might want to watch, even if they don’t own a single bond.